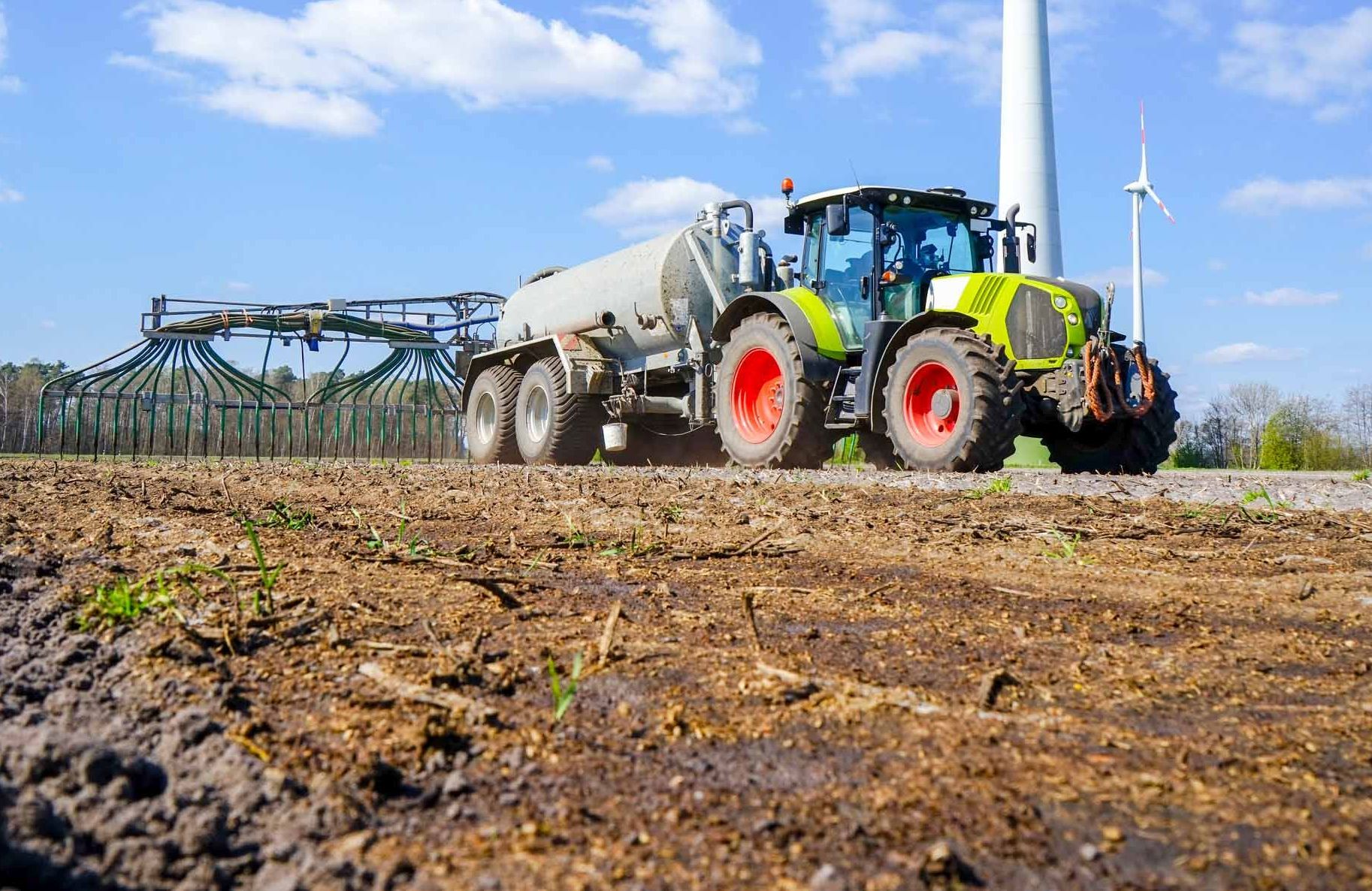 In many places, intensive agriculture has a negative impact on natural water resources. Overfertilisation has led to a progressive deterioration in groundwater quality in Germany. DVGW supports agricultural activities which protect water resources and are compatible with safe and sustainable water supplies.

Too Many Animals – too Little Land

Our groundwater is jeopardised by intensive livestock farming and overfertilisation

In many regions of Germany, the groundwater is already significantly impaired by overfertilisation or more precisely by nitrates. The main reason for this development is intensive livestock farming, which produces far more manure than can be spread on the land that is available. In this context, people refer to a “high livestock density”. The problem of overfertilisation resulting in high nitrate concentrations in the groundwater has been well known for decades; in the meantime, the consequences for drinking water supplies in many regions have become severe.

Germany is not only one of the leading industrial countries but also the third-largest exporter of agricultural produce in the world. More than 218 million cattle, pigs and poultry are kept at about 199,200 farms to meet high consumer demand. No country in Europe produces more milk or pork than Germany.

However, intensive livestock farming causes a significant problem. The farms produce more liquid manure than it is possible or permitted to spread on the land that is available. In addition, excess nutrient levels have been further increased in many regions over the past 10 years as a result of the expansion of biogas production. The energy crops grown for the almost 8,000 biogas plants in operation in Germany call for large quantities of fertiliser, especially for maize.

However, if biological waste is also fermented at these plants in addition to energy crops, large amounts of fermentation residue are produced. These are then spread on the land, increasing the nutrient surplus in the soil.

If too much manure or fertiliser is used on the land, more nitrogen reaches the soil than the plants can absorb and process for growth. In the form of nitrates dissolved in water, the nitrogen seeps down through the soil, finally reaching the groundwater, where it has disastrous consequences.

With a share of 61%, groundwater is the main source of drinking water in Germany. However, the quality of many groundwater resources in Germany is now so poor that it is difficult to use for water production or has even been banned as a water source. Investigations made for the German government’s nitrogen report in the period from 2012 to 2014 indicated excessive nitrogen levels at about 50% of the monitoring points. The values measured at 28% of monitoring points were even in excess of the maximum limit for drinking water.

Under the Drinking Water Ordinance, nitrate concentrations up to 50 mg/l are admissible and are classed as harmless to health. If this limit, which applies throughout the EU, is exceeded, the water must be treated to remove nitrates, a costly and complex process. Another possibility is to mix the water with water from other areas not contaminated with nitrates to reduce the nitrate concentration to an acceptable level.

Nitrates enter the groundwater due to agricultural influences © DVGW
What are nitrates? 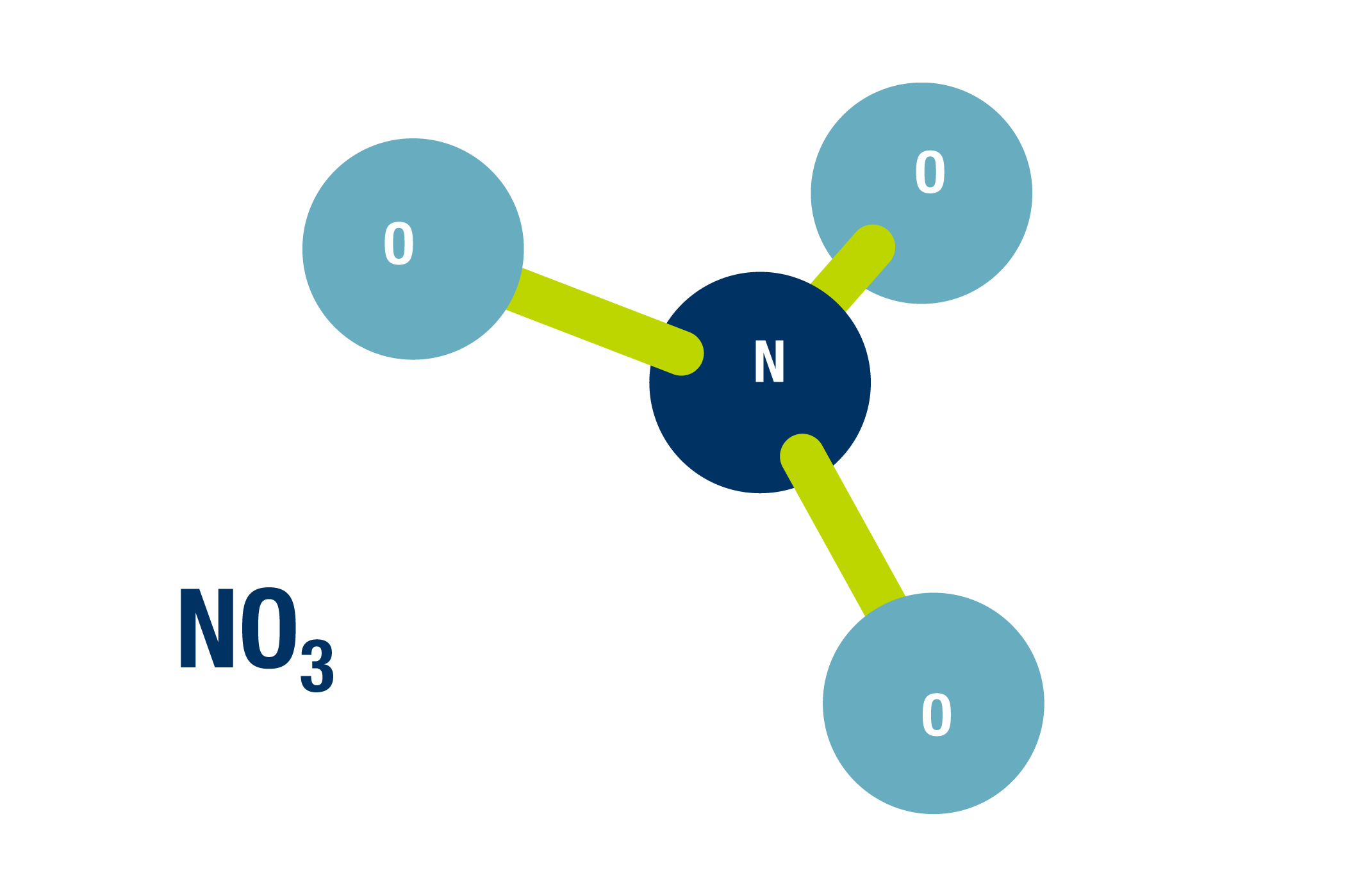 Nitrates (NO3−) are among the nitrogen compounds in the natural nitrogen cycle and consist of the elements oxygen (O) and nitrogen (N). As salts, they are readily soluble in water and seep easily into the soil. Plants need nitrates for growth and absorb them via their roots. If natural mineral and nitrogen compound concentrations in the soil are too low as a result of intensive agriculture, these may be added in the form of organic (e.g. solid or liquid manure or digester residues from biogas plants) or mineral (e.g. limestone, nitrogen, phosphate) fertilisers. However, if too much fertiliser is used, the nitrogen concentration in the soil is raised from its natural value to environmentally harmful levels.

How do nitrates reach the groundwater? 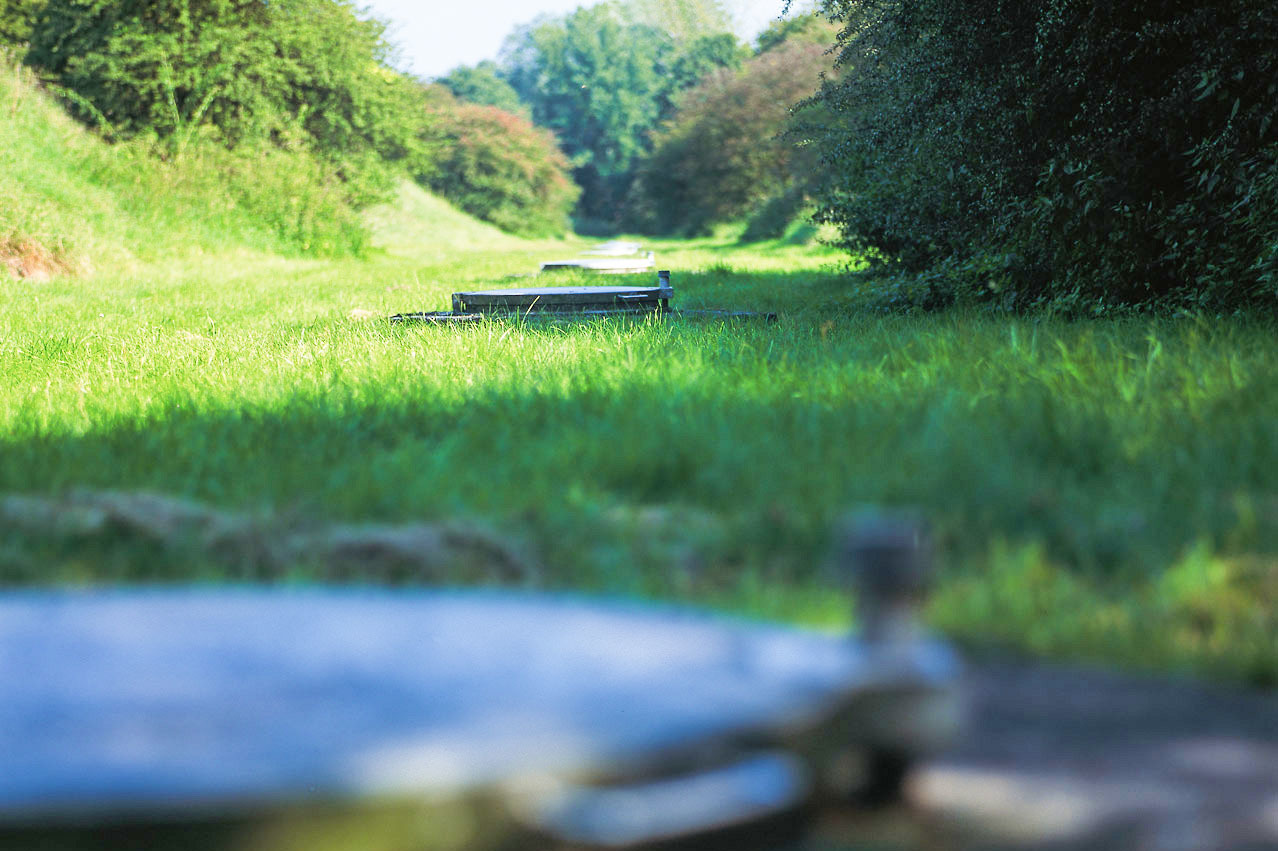 In the event of overfertilisation, a nitrogen surplus which cannot be absorbed by plants is created in the soil. The soluble nitrates reach deeper layers of the ground and eventually the groundwater by seepage. Along this path, natural denitrification occurs as a result of bacteria, depending on soil conditions. In this process, the nitrogen which is bound in nitrates is converted into gaseous compounds. However, the denitrification capacity is normally only available for a short time and cannot be regenerated. Under unfavourable conditions, the denitrification potential of the soil may be exhausted after a few years or decades, resulting in significantly higher nitrate concentrations in the groundwater.

As many groundwater resources in Germany already have excessive nitrate concentrations, water supply faces a considerable challenge. Wells in areas that are affected need to be abandoned, complex treatment processes need to be applied or the water produced needs to be mixed with water from regions not affected by nitrates. These additional costs are reflected in the water prices paid by consumers.

What are the risks? 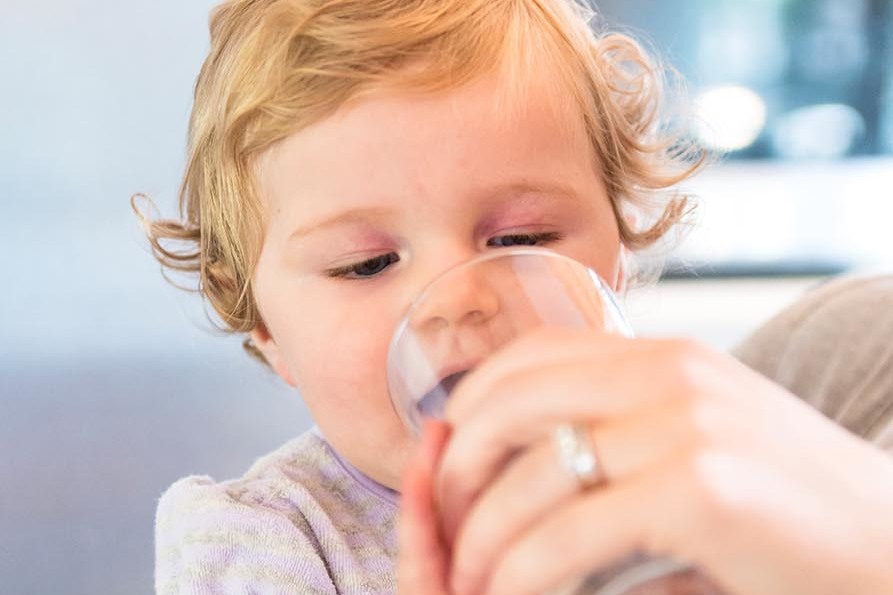 Drinking water - the most strictly controlled food in Germany © iStock.com/martinedoucet

Nitrates only pose a low health risk for adults. However, they may be converted into nitrites by bacteria in the body – for example in the mouth or stomach – resulting in two types of hazards. Nitrites are considered to be carcinogenic and they can also present an obstacle to oxygen transport in the blood in the case of young babies.

The Drinking Water Ordinance in force in Germany lays down a maximum limit of 50 milligrams of nitrate per litre. Both for adults and for babies, health hazards as a result of nitrates in drinking water in Germany are therefore generally excluded.

"Overfertilisation has jeopardised our drinking water resources for many years. There is an urgent need for action to ensure adequate protection for our most important essential resource." 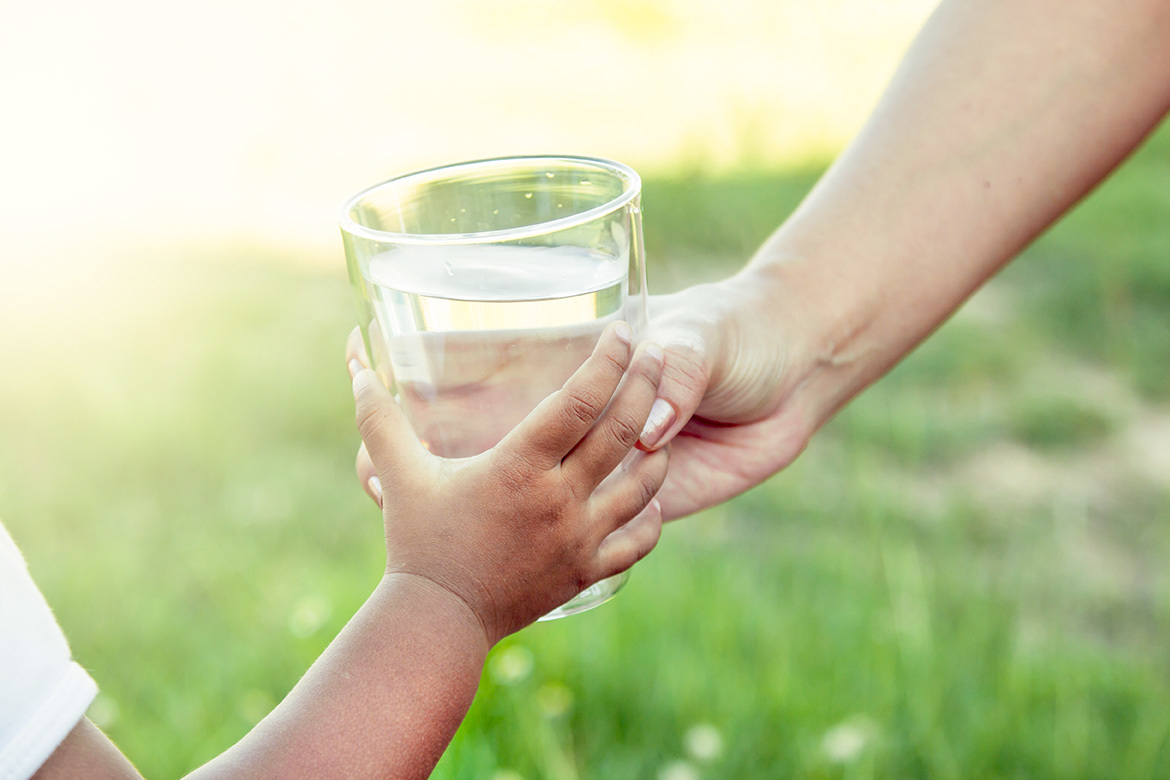 As a non-profit association of the German gas and water industry, DVGW has been committed for many decades to the proactive protection of water resources and participates actively in legislative procedures, political programmes and discussions.

With opinions, press releases and the presentation of its position towards ministries, DVGW has been intensively involved in the amendment procedures for the Fertiliser Act and the Fertiliser Ordinance in Germany from the beginning and has made its expertise available to political decision-makers.

Through its involvement in specialist research, also with its own institutes, DVGW provides impetus for scientific discourse and political debates concerning nitrate pollution.

Internationally, the association is involved in raising awareness of the problem of groundwater nitrate pollution and is committed to networked thinking and joint action on the part of all the relevant bodies within the EU as a member of EurEau, the association of water and wastewater industry associations from 29 European countries.

Several monitoring networks are available for measuring groundwater quality in Germany. These networks were installed for different purposes and there are considerable differences in the density and selection of monitoring points. Although it is possible to make a representative evaluation of the groundwater situation in Germany on the basis of the data available, there was no comprehensive database giving a precise overview of the nitrate pollution of all groundwater resources. For this reason, the industry associations DVGW, BDEW and VKU together decided to establish a groundwater nitrate database. Using the new database, nitrate loads in groundwater throughout Germany can be recorded and the measurement results obtained by the about 2,300 water suppliers in Germany can be pooled at a central location. The objective of the initiative is to systematically document nitrate pollution in the water protection and catchment areas of drinking water wells and to supplement existing monitoring networks in s targeted way with a view to developing effective countermeasures for the protection of drinking water resources.